Top 10 nba draft prospect: Prediction for the next 3-5 years. 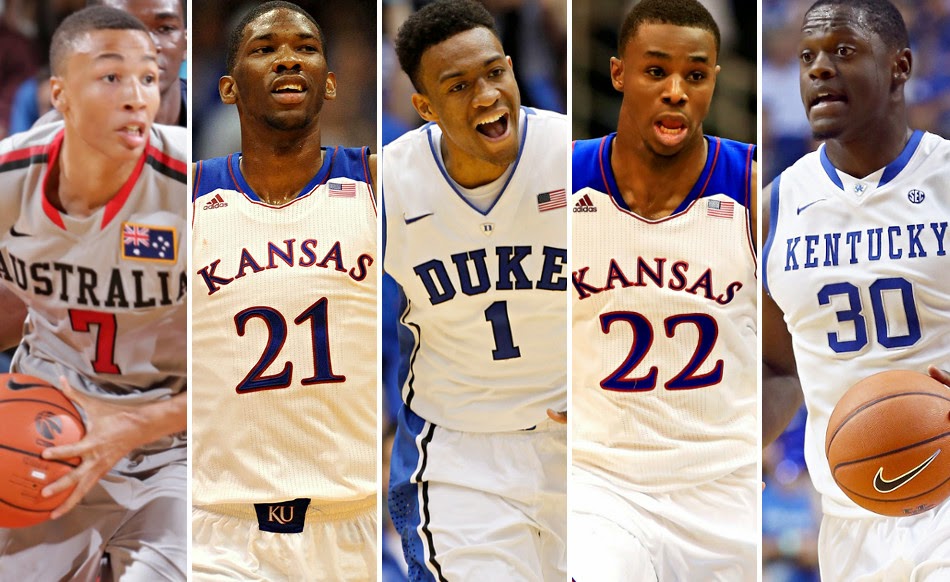 Based on NBA draft 2008-12 top 10 picks(i just exclude the 2013 class since it is too early to make a conclusion.) all of the 1st pick becomes a star for their team.  and for some reason, most of the 2nd pick fail to fill the hype or fall from a good start of their career. after pick#1, i see only 17% chance finding a hidden star player. a big reason why these players are picked in top 10 are because of the hype, those mock drafts set by media which i really think affects the decision of a team in selecting a player.

Of-course i understand, the GM's job is on the line and if he picks a player out of nowhere, i can see the owners reaction "wtf", you are so fired if he's a bust! so i see that it is better to play it safe than trying to seek for the hidden Gem. I only see 1 GM who takes that risk and now he's fired even though those wild picks seems worth it. Picking Tristan Thompson and Dion Waiters seems a surprising but payed off, not a bad pick. what went wrong was when he pick the biggest surprise of all, picking Anthony Bennett at #1 and this time he fails.

Prediction list:
*Jackpot star - star player of the team
*Late star       - decent stats a rookie, after two or more years will have bigger star role
*Starter          - a solid starter on the team.
*Falling star    - solid stats but will decrease as year goes by
*solid role player - part of the rotation from the bench
*Edge of Bench  - plays minimal role or out of rotation.
*Bounced off - out of the league

Here are my reason. This is just a wild opinion.

1. Embiid - it is no secret that Embiid has potential, the only question is when will he reach that potential. Anthony Davis did it in sophomore season. Oden did not reach it because of injuries. Embiid is really a big question mark. 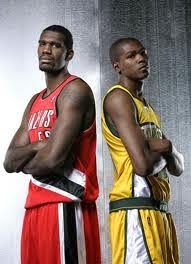 2. Wiggins - is still as good as #1. it just the media over-hyped him thus he falls hard when fails what people expect to see from him.
I still have faith on Wiggins, just like Andre Drummond came out from High school as the #1 prospect but fails to showcase his ability in college. but came out as on of the best in 2012 class.

3. Parker - is a sure thing. not the most athletic but will surely produce. I see him more of a rich man's Kawhi Leonard with a go to player instinct.

4. Randle, slips down on mock drafts but i believe he'll be pick top 5. He'll become a very solid starter, not a superstar but worth a consistent provider. I see a Tristan Thompson situation or role on him.

5. Exum - Everyone seems intrigue on this young international prospect. "Oh, Penny Hardaway, i never seen this guy play in college but he looks good on Youtube." I just have a feeling that Exum will end up like Austin Rivers did. 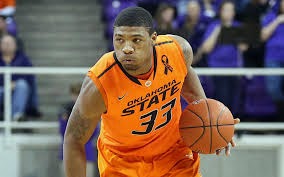 6. Smart - great strength for a guard. that's it, i see him as a stronger westbrook type of player, will try to do too much which cause a turnover and a very inefficient player.
guards who are not so great shooter which succeed in NBA are those who passes very well and that's not the case for smart.

7. Vonleh - teams will gamble on Vonleh based on potential, but i just see him in Biyombo's situation. He don't posses the Go to guy instinct and will not bring a big impact to the game. instead, he'll end up in a minimal role until he'll be out of the rotation.

8. Gary Harris - he will struggle to live up the hype but will eventually find a solid role on a team. A.K.A. Thomas Robinson situation. 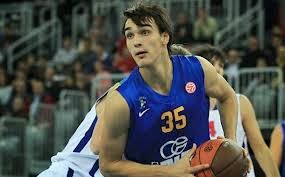 9. Anderson -  is really a good player for UCLA but he's so unique that he may find it hard to fit on the NBA. He's not athletic player to play the wing definitely not a place for him. he don't shoot the ball that good too. drafting him too high is a mistake and i see him at the end of the bench.

10. Saric - I see a poor man's young Kirilenko. he don't heavily fill the stats but surely provide an impact to the team as a solid role player.

Posted by fashchronicles at 7:13 AM No comments:

It's a brand new week of action in the PBA. Make sure you don't miss a single action in the ongoing action at the PBA 2013-2014 All-Filipino Cup. Check out below for a list of games to look out for:

Be sure to check us again for updates and schedule information.
Posted by fashchronicles at 6:05 PM No comments: 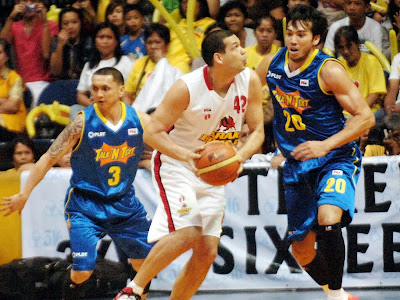 After months of anticipation, Danny Seigle is finally speaking up and is ready to play. The fiasco that followed the draft and trade controversy involving his former team Barako Bull resulted in The Dynamite declining a one-year contract extension offered by his former team. That left Danny Seigle, the 39-year-old veteran and former Rookie of the Year, without a team to start off the PLDT MyDSL Philippine Cup for the 2013-2014 season of the PBA.

A week after the tipoff of the All-Filipino conference, though, there is finally some progress in the story. Danny Seigle himself has confirmed that he has agreed in principle to play for Talk 'N Text wherein he is awaiting the finalization of his initial one-year contract deal with the Manny V. Pangilinan franchise.

According to Danny Seigle, he is "just excited to play" above anything else. After all, it can be recalled that he had one of those rare conferences last Governor's Cup wherein he played injury-free for the entire conference and averaged 11 points, making him among the scoring leaders for Barako Bull.

There were several speculations about which teams Danny Seigle and his agent were talking to with Meralco Bolts even brought up one time. But aside from the opportunity to play again in the PBA, a more interesting development here is the fact that Seigle will be donning the jersey of his former team's biggest rival. Seigle started out his PBA career playing for San Miguel Beermen which is owned by SMC. SMC and PLDT (owned by Manny V Pangilinan) are two of the biggest rival companies in the PBA dating back to his glory days of 1999-2000 season.

Danny Seigle, however, refused to talk in more detail about this rivaly but rather has set his sights on making an impact on his new team. One thing is for sure, though, Seigle is "thankful" that he is part of the TNT management, which he brought up is a championship-caliber team.

For more details on this story, please check out my source here.
Posted by fashchronicles at 1:02 AM No comments:

In the PBA, or in any basketball league for that matter, the first few picks at the draft is the most coveted. Being able to draft first would give your team the opportunity to get the top prospect in the draft class. But what if you have three, not one, draft pick at the first round? Sounds even better, right?

Apparently, Barako Bull and its management did not see it that way. They held the 4th, 5th, and 6th first round draft picks for the 2013-2014 PBA season. That meant they can acquire three top prospects from the 2013 draft class! And with a talent-laden draft class that everyone has been raving about, one can only think that Barako Bull hit the jackpot- even though they did not get the top pick!

Thus, my jaw dropped to the floor when I found out about the news that they traded their draft picks for Barangay Ginebra (4th pick), Petron (5th pick), and GlobalPort (6th pick). In exchange for their draft picks, Barako Bull will get Dylan Ababou, Magi Sison, Mark Isip, and Denok Miranda (from GlobalPort). It's a curious situation to say the least. All four players hardly ever get minutes on the floor from their previous teams, with Denok Miranda putting in the most minutes. And Miranda's even a third unit player for Petron, in most cases! This leaves fans to question Barako Bull's decision to trade their picks... BUT WHY?

Fans, sports analysts, and team owners alike had been irate about this recent development and most of them aren't shy about expressing their views on Twitter. Check out their tweets below, ranging from serious to funny: 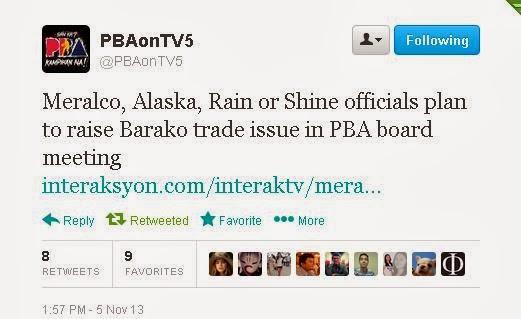 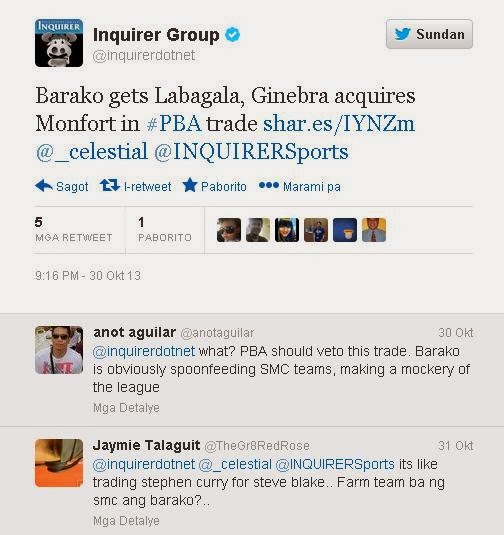 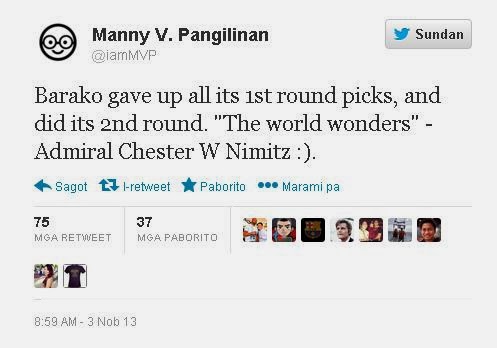 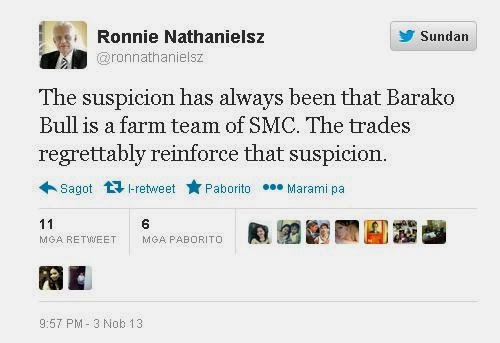 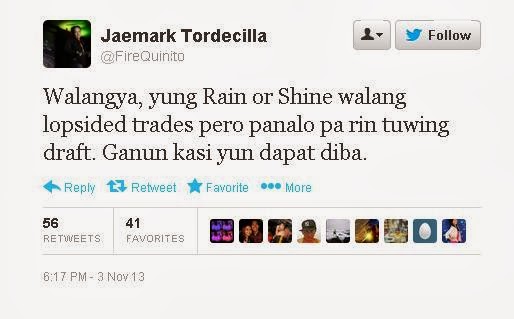 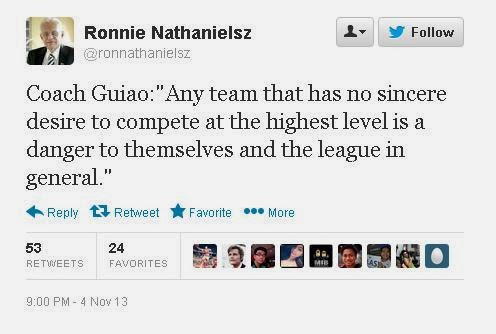 It is also not coincidental that Serbian head coach Rajko Toroman has decided to leave the team. Now, not only is Barako Bull in the midst of a controversy, they are also without a head coach. Leo Austria is being raised as a potential new "head coach" but nothing has been made official yet.

For the most part, I've tried to maintain an objective standpoint in this blog, hoping to provide information and stick to a reportage kind of blogging. However, this recent development in the PBA involving one of the teams that I support has been disheartening, to say the least, for a basketball fan. I am sure that I speak on behalf of the fans' in expressing my dismay over Barako Bull's decision during the draft wherein they gave up the opportunity to acquire young and talented prospects who could strengthen the team in the future for players who, if they did not happen to be bench warmers in their previous team, were nearing the end of their playing career. There has been several suspicions over the basketball community about them potentially being a farm team but with the decision to give up 3 first round draft picks for players that can be referred to as past their heyday, there can't be a more glaring evidence than that.


Unless the Commissioner can come up with a logical and valid explanation (which I seriously doubt they could), the reputation of the league will forever be tarnished. The Commissioner has even rejected a less lopsided trade deal in the past, so it leaves one to question how this got passed by the board? It's a widely known fact that professional basketball is business, too. But when the business side of basketball has superseded the competition and sports, that is when it gets ugly. Hopefully, this isn't the start of PBA's demise.
Posted by fashchronicles at 11:36 PM No comments:

Who will be crowned PBA 2013 Governor's Cup champion?